skip to main | skip to sidebar


34 degrees. That'd be 34 Fahrenheit, not Celsius. Maybe we should have started the ride at 9? Well it's 8, and that's that. The blood in my brain was moving like the syrup on the pancakes I just ate at the Rainbow Cafe, and those synapses were not firing. Must. pedal. bike. We started the ride and I immediately took our group of 8 the wrong way through CSU campus, so we had to backtrack to get back to the original route. Can't stick to a plan for more than, oh, 30 seconds it seems like. Also we were all moving very slowly at this early and frigid hour of the morning. My knuckles were freezing and my toes were numb.


This was the final day of Motor Free "Month", 35 days of living without setting foot in any sort of motorized transport. To celebrate this final day, I and some friends rode our bikes from Fort Collins to Boulder for lunch, and then back to the Fort. A nice 100 mile ride. The ride was named "Noodles 2 Noodles" (everything has to have a name) since the start, turn-around, and end were at Noodles & Co. locations. I suppose it could have been called Noodles 2 Noodles 2 Noodles? I wonder if I could figure out a ride whose initials were H1N1?

Regardless of the name, or perhaps because of it, I was actually able to convince 7 other people to join me on this ride. It was to be C_'s first century ride. Several friends of mine also joined: Jim and Katrinka were game as well, and also Jeff and Emma. The 4 of them had rode "E-Rock" earlier this year and were excited to ride another century, particularly an easier century ride with a cooler name. Tony joined us as well. He was an experienced cyclist who also rode with us earlier this year at the CFF charity ride to Ward. Rounding out the 8 was our ringer Felix, who quite recently successfully completed a solo 200 mile ride in one day, from Fort Collins to Walden and back, surmounting Cameron Pass twice on the attempt. I wasn't too worried about Felix finishing the ride. Or breaking a sweat.


Our route to Boulder took "The Back Way". This is a lovely and flat route that generally tacks West towards Boulder at is meanders through the back roads of Larimer and Boulder counties.

It's a nice way to get between the two cities by car as well, if you have a little extra time. On bike it's probably the fastest route between the same two cities. Curious that the same route could be the slowest (Standard route) via car, and the fastest via bike. Clicking on the map will take you to an interactive map of the route. Much of the first 10 miles of the route were the same as my ride to Denver the previous week, due to the paving detour fiasco that time. Today there would be no construction messes; we knew that Hwy 66 between Longmont and Lyons was all torn up, so we opted for the straight shot through Hygiene instead of the more scenic but more difficult "36" route via Lyons. Ironically we had to stop on the route in nearly exactly the same spot as my construction detour, but one mile West, when Jim got a flat tire not even 10 miles into the 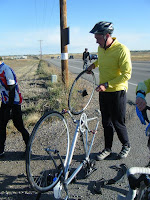 ride. This was to be our only mishap of the day, thankfully. And now that I've given away that nothing really crazy happened during the ride, I'll be hard-pressed to keep your interest, patient reader. But I'll try nonetheless.


I found that it was easier riding with a group instead of solo. I frequently found myself happily putzing along in the back of the group, enjoying the nice draft effect. When I rode to Denver I was completely on my own, so I

obviously got no drafting benefits. Apparently drafting can reduce the effort required to cycle by 25% or more. Meaning if I drafted the whole way, I could expend only 75 miles worth of effort on a 100 mile ride. Of course someone has to lead the pack and put forth the 100% effort -- we can't all draft! I did take a few turns up front but I don't think I pulled my weight there; mostly I was content to hang out back. With 8 people on a 100 mile ride, if each person did their share of leading, then each person would lead the pack for only 12.5 miles. If we were organized we probably would have come up with a system for switching up leaders and what not. As it was we were not terribly organized, nor were any of us racers, so we really had no idea what we were doing. The group tended to get split up into two or more smaller groups fairly frequently, which meant that 2 or more people had to put forth full effort instead of only one. And none of us were all that great at maintaining a steady pace, which made staying together difficult and somewhat dangerous. And frankly I wasn't paying much attention to staying on the wheel of the person in front of me, and I frequently found myself far behind the slipstream of the pack, and needing to bust my butt to get back in the pack several times.

For you non-biker-types, that's why you see all the bike racers all bunched up in the big peleton during le tour. They're just straight-up lazy, ha ha. I suppose that's why those flat Tour de France stages are so boring; there's hardly any reason or opportunity to break away and win those stages until the very end. Why don't they just do a 5 mile race on those days? Only the last 5 miles seem to matter anyway! It is interesting being in the slipstream of another rider's wake. You can tell you are drafting by the lack of wind, and it's even a little warmer. You start to catch yourself wondering, "jeez, why isn't (so and so leader) pedaling any faster? This is a really easy pace!" not remembering of course that they are having to work 25% harder than you to maintain that pace. If it feels easy, big boy, why don't you take a turn up front! 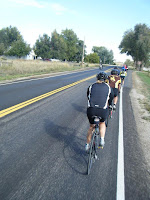 Overall we were not as organized as the massive groups or riders we saw in Boulder County that day. But when the group was all together it really worked! And besides, it was a lot more fun to ride with friends than on my own. A 100 mile solo ride is an awfully long time to be without any communication aside from the voices in one's head, which in my case are fairly entertaining, but probably not good for my mental state.


We arrived at the turn-around Noodles in Boulder (the one by Ideal Market) at about 11:45 am. That was about 3 hours and 17 minutes "in the saddle" as they say, and close to 3 hours and 45 minutes transit time when breaks are taken into account. I was able to meet up with my friends Mike and Valia, Ken, and Kathy, and assorted progeny for lunch. The MFM theory tested today 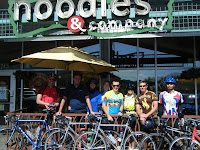 was, how difficult is it to meet someone for lunch in Boulder? Apparently it's possible, provided you have about 8 hours to spend doing it, and your friends don't mind waiting about 30 minutes at Noodles & Co. for you to arrive. Not terribly convenient, truth be told, but kind of fun.

Our gang spent at least an hour at the cafe before saddling up and starting home again. The weather had warmed up nicely and there was little if any wind. We really got lucky with the weather this day. Unlike running which one can do under almost any conditions, biking does have a threshold of atmospheric crappiness below which riding really can't occur. Aside from the cold temperatures that bedeviled us in the first hour, we were far above that line and enjoyed a beautiful ride home. Emma's husband Blake met us at about the halfway point between Boulder and Fort Collins, and we enjoyed a bona fide aid station complete with bananas, cookies, bagels, and water. That was awesome!

Like I said, the ride was uneventful in the epic sort of way, unless one considers the accumulation of miles in and of themselves to be epic. We hit 90 miles just north of Loveland, and with just one more hill to climb on the South ramparts of Fort Collins, we knew we had this ride "in the bag". Consequently it seemed like the group really started to splinter at this point. 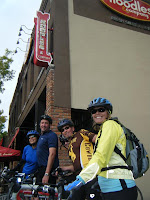 Every man for themselves! Last one to Noodles is a wet noodle! All the stoplights in town served to keep the group together, but everyone was excited to be done, and ready to be done. And after a quick shortcut back through campus that actually was a shortcut this time, we found ourselves back at the original Noodles.

Done at last! A quick celebratory drink at the Pickle Barrel, and the group split up for good. Thus concluding Motor Free Month for yours truly. But that zombie wouldn't die. There was one more trip left in the 'ol month it seems. Besides, even considering the extra distance to and from our house to the start of N2N(2N) I don't think we had covered the requisite 100 miles to consider our journey a "century". So back on the bikes we got, to go to a friend's house for a housewarming party. The riding was slow on tired legs but C_ and I sucked it up and did it. This was one trip I'd have gladly done in the car had I not been Motor Free.


Now finally, returning home, I was done at last. 35 days of motor free travel, "in the bag". It was quite the adventure. Thanks for following along on the blog! I plan on posting about driving a car on October 4th, what that felt like. Until then, ride on, courageous reader, and I'll see you at the bike rack!
Posted by Slush at 9:44 PM